Will the Circle Be Unbroken?

A major reason we never experience a peace dividend when we wind down a war is the fact that those that can profit through fear, construct another enemy that will require more or more powerful  weapons, more soldiers at the ready, and certainly no additional investment in diplomacy. We’ve been replaying this scene since at least the end of WWII. I say at least WWII, because over the past few months I have found myself reading about the end of that war and the role that fear towards Russia and China was stoked by key figures in government, the military, and hawks of that time.

There were progressive voices, including from the military offering alternatives to these more confrontational approaches, like making huge investments in economic conversion from weapons to redevelopment in war torn arenas, and to peace time needs that could employ the returning GIs. But the industries that were strongest and relied heavily on the government to buy their products, were resistant. As later President Eisenhower would call the Military Industrial Complex:

Every gun that is made, every warship launched, every rocket fired signifies, in the final sense, a theft from those who hunger and are not fed, those who are cold and are not clothed.
This world in arms is not spending money alone. It is spending the sweat of its laborers, the genius of its scientists, the hopes of its children. The cost of one modern heavy bomber is this: a modern brick school in more than 30 cities. It is two electric power plants, each serving a town of 60,000 population. It is two fine, fully equipped hospitals. It is some fifty miles of concrete pavement. We pay for a single fighter with a half-million bushels of wheat. We pay for a single destroyer with new homes that could have housed more than 8,000 people. [President Dwight Eisenhower, April 16, 1953]

Many of the leaders that made the birth of the United Nations possible struggled constantly to build a world of peace, openness, diplomacy, and economic prosperity. Factions that believed Russia was committed to conquering the world, or that the communists in China had all of Southeast Asia in their sights, foisted their fears on the general population fueled by right wing fear-mongering. Today is no different.

This became quite apparent especially with the decision to drop the Hiroshima and Nagasaki bombs. It is clear from the records of those involved in that decision, that it was more to show Russia how tough we were, than to defeat the crumbling Japanese force. From there we see the rise of J. Edgar Hoover and his socio-pathic fear of everything; the rise of Joseph McCarthy; the failed domino theory of Vietnam, etc., etc., etc.

When Gorbachev changed the Soviet Union’s approach and Reagan engaged with him, they found both nations willing to limit nuclear weapons. When the Soviet Union broke apart as Gorbachev cut the chains, the peace dividend that should have followed evaporated as the new enemies du jour were transplanted to the Middle East and Central America, followed by the Axis of Evil, and now full circle to China and Russia again. If we keep following this circus train that shines its floodlights on ever new enemies, we will bleed the world of resources needed to meet the globally agreed upon Sustainable Development Goals and the encroaching global threats of pandemics, climate change and income inequality. We need to get off this escalator to nowhere and get serious about building enduring institutions, avenues of diplomacy and shared prosperity.

The fight is on once again to bump up an already over-bloated, un-auditable war budget. President Biden is asking for more money for the war machine, even as he ends the Afghanistan war. Deficit hawks rarely suggest a cut to the sacred war budget. Yes, you can cut food stamps, cut environmental protection, shrink diplomatic corps, or make tax evasion by the wealthy so much easier, but please don’t touch the war budget.

Just today it was reported that the ten largest defense industry contractors spent $25.7 million lobbying their case in just the first three months of this year!!!

Economic conversion as discussed at the end of WWII and then intermittently and briefly thereafter with a slight resurfacing at the end of the cold war, has never seriously been debated in the public sphere. Yet, studies like those at Brown University’s Watson Institute for International Affairs “Cost of War” project show that the same amount of funds invested in education, health care or renewable energy, will produce substantially more jobs than the defense industry, not to mention all the social and environmental benefits that would follow. Recent polls show an overall willingness of voters to support a reduction in military spending (not at the expense of our soldiers).

[A new report released today from the Center for International Policy, notes not only the outrageous salaries of the defense industry CEOs, but the great disparity between soldiers we send into battle and the industry executives.]

Too many members of Congress, with rare exceptions, have been unwilling to challenge the military industrial juggernaut that always calls opponents “soft on defense” or “socialists” or some other pejorative name. The same playbook keeps working. It has gotten so bad that Congress has all but forfeited its Congressional power to declare war, allowing presidents of either party to initiate and/or continue armed incursions without approval.

Maybe there is kindling a possible formidable challenge to this unbroken circle. The following signs suggest a change in direction might finally be possible. In recent months we have seen the emergence of a Defense Spending Reduction Caucus in the House of Representatives with more than 50 members signing on to a letter to President Biden to reduce military spending.

Organizations as diverse in political orientation as the National Taxpayers Union, Cato Institute to Code Pink, Public Citizen, FCNL, and World Beyond War are calling for reductions. The Poor Peoples’ Campaign has made redirecting bloated military spending to human needs one of the five primary issues. A coalition of more than 20 national organizations has been formed to resist the lobbying of the wealthy defense industry under the name People Over Pentagon label. H.R. 256 that would repeal the 2002 AUMF that has been used to authorize so many military excursions now, has a remarkable 128 co-sponsors.

All that seems to be missing to move the needle are citizen voices ringing on the phones of Congress. Can you spare two minutes of your time to help break this circle of violence and redirect our resources towards real human security?

Posted by Possibilitator at 2:48 PM No comments:

So Tired of Playing Defense

I’ve been moving myself through Gar Alperovitz’s stunning 1995 The Decision to Use the Atomic Bomb and the Architecture of an American Myth for the past month or so. This 843 pager (48 chapters plus appendices) with more than 2,600 footnotes is a compelling historical detective work. I’ve completed the first 46 chapters and 588 pages.

The 2,600+ notes do not include additional author notes sprinkled every few pages. It was one of these that led me to check out yesterday The Price of Vision: The Diary of Henry A. Wallace 1942-46 (edited by John  Morton Blum) and published in 1973. This is no lightweight volume either, coming in at 707 pages. One of the appendices that Blum adds is a speech, “The Way to Peace” that Wallace gave in September 1946 at Madison Square Garden that led to his firing by Truman.  Wallace was by all accounts a unique and interesting figure. One can’t help but wonder what the world would look like now, had not Roosevelt substituted Truman for Wallace as VP in 1944.

I read that 1946 speech and then a few minutes later read a report in a defense industry post I receive each weekday morning about the addition of a U.S. joint aircraft carrier strike force into the South China Sea. Wallace might have been a bit too idealistic in 1946 about the Russian threat, but the analysis he offered then, seems strikingly similar to the forces at play today. My concerns that President Biden’s administration would continue the militarism of the previous administrations suggests we are on the same conveyor belt which Wallace objected to, which benefits primarily weapons manufacturers. Even Eisenhower who was critical of that same force as most forcefully demonstrated by his farewell address, was controlled by it.

Who in government is willing to call it out today, besides a few members of the Progressive Caucus (see the new Defense Spending Reduction Caucus)? Biden’s cabinet selections on the foreign/military policy side are no doubt loyal to him and have largely hawkish resumes. If they dare to publicly speak otherwise, they would no doubt suffer the same fate as did Wallace 75 years ago. We need some courageous souls within government to call this out.

Many of us have been pushed into defensive postures over the past four years by attempts to dismantle American democracy. It has drained the energy of many. We might be tempted to relax our postures with the election of a liberal to the executive branch, but some myths of American exceptionalism die hard. While we must defend  against continued theft of our common wealth by the drivers of the corporate military-industrial complex, it is equally important that we offer real alternatives. As I have reflected in this blog frequently over the past, there are alternatives.

Let me offer one sterling example. The London School of Economics shared a wonderful webinar on Friday, featuring the amazing economist Kate Raworth, author of Doughnut Economics, which I have reviewed on more than one occasion. Listen attentively to her present a real alternative, now being adopted and applied in places around the world. She’s not a dogmatist. This is a framework that makes total sense with what we know about our world today. As we learn more, we may need to shift and adapt it, as she readily admits. But the possibility for a better world for all is there if we will look, reflect, and act to as Jean Luc Picard might say, “Make it so.” 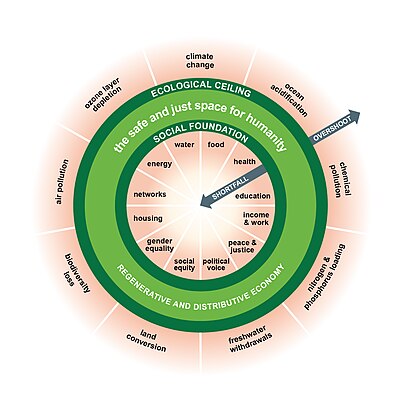