This practice has irked me for decades. In higher education we see it more often reported in relationship to highly paid athletic coaches and athletic directors when they are fired. The rest of us stiffs can work 30 years or more and retire with maybe a watch or other symbol of appreciation. Not the high rollers. On top of extraordinary salaries year after year,  they walk away when they are finished with benefits the rest of us cannot fathom.

Case in point is the Lansing State Journal story yesterday on the former Michigan State University president. It is a common practice for tenured full professors, not for the rest of us, to get an extra year of salary when they retire for basically doing anything they want, or not much at all. Now the janitors, food service workers and others who make somewhere  between  $30,000 - $40,000 or so  a year, might get  handshake when they leave after 30 years. The MSU president who made millions over the years  at MSU will make an additional $700,000 for her first retirement year and then some $562,000 year  thereafter.  The janitor/food worker would have to work 40 hrs a week for 14 to 18 years to see the kind of money the lame duck receives.

Of course, the president is not  the highest paid campus employee. That honor would go, like in most states, to one of our coaches.  Men’s basketball coach squeaks by on $4.2 million (2017). While head football coach  got a juicy raise this year (2018) of  $700,000, because $3.6 million wasn’t enough, putting the two at parity.  Lord only knows what golden parachutes they will exit with. MSU is a public institution, for which it is hard to justify how high these salaries go. Unless, of course you raise the feeble neoliberal argument that the market is the supreme ruler that trumps any other value worth consideration.

MSU doesn’t report its median salary – that point between which half of the employees make more and half make less, at least the last time I tried to find it. While there are many professors and administrators who make six figure salaries the vast majority of those are between $100,000 - $300,000. A relative handful rise above that level.

The median household income in Michigan is $52,492. That’s a household income, not a per capita income. According to a study from 2016 by the Michigan League for Public Policy, Michigan is the 11th worst state for income inequality, where the top 1% earn more than 22 times than the bottom 99%. If MSU’s lowest salary is approximately $30,000 then if that ratio (22) transfers to campus, the 1% would make more than $660,000. There are probably roughly 10,000 full-time employees at MSU. The  100 highest paid would be a rough equivalent of the 1%. Our highest paid coaches each make about 140 times the lowest paid employee. Of course golden parachutes are never calculated into the 1% income stream. They are hidden.

Growing income inequality is one of the biggest challenges facing the human family here and abroad. While raising the floor to ensure everyone can live a decent life for working 40 hours will help,  the unconstrained acceleration of wealth accumulation at the top needs to be halted if this gap is to reach some more morally defensible level. You would think a public institution would have that as a key goal and want to provide a model for its students to observe .  But if we continue to hire leaders who continue to imbibe the neoliberal kool-aid, we can be sure the accelerating inequality will grow. Perhaps the LSJ story can inspire a serious conversation about this most serious and growing problem.

Posted by Possibilitator at 10:25 PM No comments: Links to this post

A Double Anniversary to Remember

Today, April 4, marks two significant anniversaries. Of course, one is the one remembered by nearly  all who were alive at the time - the assassination of Martin Luther King, Jr. in Memphis, on April 4, 1968, 50 years ago today. One of the most visible leaders of his time, executed by hate for his courage, his powerful orations and his fearless efforts on behalf of his race and all who suffer injustice. I was eighteen on that day and had just become awakened that winter and spring to the injustice of the Vietnam War, poverty and racial injustice. 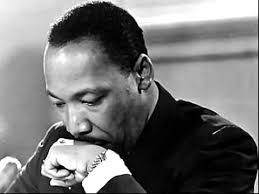 I lived in Detroit and vividly remember the riots of  '67. My late father suffered a heart attack the morning of the beginning of the riot and I became his ambulance driver to the hospital emergency room where we waited for medical evaluation over the long day and evening before he was admitted. During that day and the days that followed we saw many of the wounded arrive by 'real' ambulance and wait for treatment. No doubt this was the beginning of my education into racial injustice.

Less than a year later, on the day of King's murder, I reconnected with an old grade school pal and we walked our Detroit neighborhood catching up and while trying to make sense of this shocking murder, who was behind it, what might it trigger,etc. I still remember feeling stunned, as much, if not more so than the assassination of President Kennedy four and a half years earlier. I was learning and  trying to understand whether Martin's take on the world was more accurate or if Malcolm's was the one to hitch on to. Of course, I didn't know their histories and personal and philosophical paths to the moment of their deaths. I knew really only what the media told me. But 50 years later I can clearly recall that discussion with my friend Rick and how we both were stirred to consider the racism that to us white northerner teenagers had been somewhat hidden. 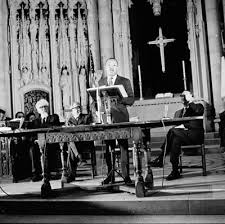 It was only years later after becoming much more involved in anti-war activity that I learned more about King's own journey. Which brings me to the second anniversary, 49 years ago today, one year to the day of his assassination, - MLK Jr., Jr.s' powerful speech at the Riverside Church in NYC - "A Time to Break Silence". This speech hosted by the group Clergy and Laity Concerned was the one where Martin expanded his view of justice to nonviolence to address war and militarism. He was roundly chastised by friend and foe alike for stepping over the boundaries of civil rights in an attempt to enlarge the circle of compassion. I have listened and read this speech many times and as I did earlier today. His language is powerful as this early excerpt from the introduction confirms:

I come to this magnificent house of worship tonight because my conscience leaves me no other choice. I join you in this meeting because I'm in deepest agreement with the aims and work of the organization which has brought us together: Clergy and Laymen Concerned About Vietnam. The recent statements of your executive committee are the sentiments of my own heart, and I found myself in full accord when I read its opening lines: "A time comes when silence is betrayal." And that time has come for us in relation to Vietnam.

He surely tackles the issue of Vietnam head-on in the remainder of the speech. But like most of his later work, he makes many connections with injustice across a wide spectrum of our society. War and militarism are not separate, discrete parts of injustice. They are deeply entrenched as he begins to layout his seven reasons for addressing Vietnam.

Since I am a preacher by calling, I suppose it is not surprising that I have seven major reasons for bringing Vietnam into the field of my moral vision. There is at the outset a very obvious and almost facile connection between the war in Vietnam and the struggle I, and others, have been waging in America. A few years ago there was a shining moment in that struggle. It seemed as if there was a real promise of hope for the poor -- both black and white -- through the poverty program. There were experiments, hopes, new beginnings. Then came the buildup in Vietnam, and I watched this program broken and eviscerated, as if it were some idle political plaything of a society gone mad on war, and I knew that America would never invest the necessary funds or energies in rehabilitation of its poor so long as adventures like Vietnam continued to draw men and skills and money like some demonic destructive suction tube. So, I was increasingly compelled to see the war as an enemy of the poor and to attack it as such.

He sees the hypocrisy of calling for nonviolence for civil rights struggles while ignoring the violence of war.

He digs deeper to shine the light on how our nation has been found on the wrong side of the world revolution we seek.

It is with such activity in mind that the words of the late John F. Kennedy come back to haunt us. Five years ago he said, "Those who make peaceful revolution impossible will make violent revolution inevitable." Increasingly, by choice or by accident, this is the role our nation has taken, the role of those who make peaceful revolution impossible by refusing to give up the privileges and the pleasures that come from the immense profits of overseas investments. I am convinced that if we are to get on the right side of the world revolution, we as a nation must undergo a radical revolution of values. We must rapidly begin...we must rapidly begin the shift from a thing-oriented society to a person-oriented society. When machines and computers, profit motives and property rights, are considered more important than people, the giant triplets of racism, extreme materialism, and militarism are incapable of being conquered.


... A true revolution of values will lay hand on the world order and say of war, "This way of settling differences is not just." This business of burning human beings with napalm, of filling our nation's homes with orphans and widows, of injecting poisonous drugs of hate into the veins of peoples normally humane, of sending men home from dark and bloody battlefields physically handicapped and psychologically deranged, cannot be reconciled with wisdom, justice, and love. A nation that continues year after year to spend more money on military defense than on programs of social uplift is approaching spiritual death.


This speech of King's may not be his best, although it is my favorite. How might one make such a judgment? But it is clearly entwined with all the vigor, courage, vision, wisdom of someone who saw the world connected in ways most of us have not. Throughout this talk he continues to chide his own weaknesses, but in doing so calls on our better selves to ponder our own responsibility for the world we live in. You can read and ponder his words for yourself HERE. Or better yet, listen to his own voice HERE.

True wisdom does not grow old. His words are as important today as they were 51 years ago, maybe more so.

We are now faced with the fact, my friends, that tomorrow is today. We are confronted with the fierce urgency of now. In this unfolding conundrum of life and history, there is such a thing as being too late. Procrastination is still the thief of time. Life often leaves us standing bare, naked, and dejected with a lost opportunity. The tide in the affairs of men does not remain at flood -- it ebbs. We may cry out desperately for time to pause in her passage, but time is adamant to every plea and rushes on. Over the bleached bones and jumbled residues of numerous civilizations are written the pathetic words, "Too late."
Posted by Possibilitator at 10:01 PM No comments: Links to this post