As I approach the conclusion of seven years of blogging under the moniker of Possibilitator, it is clear that my production has dropped precipitously. It has been clear since early this year that my ability to read and write at the earlier level is diminished. So as I looked back recently at some of those posts I was surprised at the numbers. If I actually publish this one it would be the 269th blog over that time, but only the 4th this year. The blogs have been viewed nearly 100,000 times by lord only knows whom, maybe Russian bots.

It was interesting to read the initial post that gave the blog its name – Possibilitator. In reading it this past week I can still say I am happy with what I proposed to do seven years ago. I was not dogmatic in always following the ideal expressed in that post, but largely I did. The hope has been to share some ideas of others that I encounter along the way that resonated with me at the time, and that I judged were of high enough quality to suggest they might be worth your time. Almost nothing I have referred to in this blog have been best sellers, or voices you might hear on broadcast tv, or read in local or national newspapers.

What it shows me is that all over the world, there are many people thinking and acting to more clearly understand the world we share and to try to make it better, not just for themselves, but for everyone. Obviously, they don’t all propose the same analysis or solutions, but the intention is obvious and encouraging. In essence they share a view of possibilities. Nothing promised or guaranteed. Since my current reading is greatly reduced in amount and depth, there has been less to share. Pulling something out of that which I read has become a challenge, one that I am not winning. But there is at least one title recently that I would like to make more visible to others.

It was the last book authored by noted sociologist Erik Olin Wright, who passed away in January after a short battle with cancer. He had visions of a bigger book, but what he has packed into this short (less than 150 pages) tome is both insightful, cogent, and lovingly shared. In reading a few of the obituaries and memorials to him it affirms the tone of his book is one he lived. 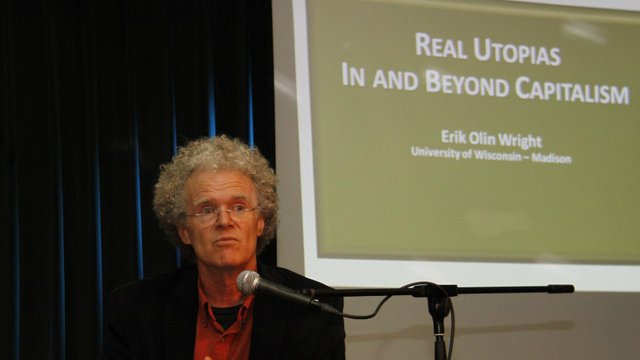 How to Be an Anti-Capitalist in the 21st Century was meant to be a book in two parts as he describes in the preface.
“I wanted to write something that would be engaging to any reader interested in thinking  about these issues. But I also found it difficult to write about new arguments and themes without the usual academic practices of entering into debates with alternative views, documenting the sources of various ideas that contributed to my analysis, using footnotes to counter various objections that I knew some readers might have, and so on. My problem was basically that I was writing for two different audiences: people who would be interested in the issues but not the traditional academic elaborations, and readers who would feel the book was not intellectually rigorous without those elaborations.” (pp. xi-xii)

The cancer interfered with those plans, but luckily for us he managed to complete part one - for a general audience.In it, Wright lays out an analysis of the failures of capitalism and provides possible approaches to address them. He lays out four theses as summarized succinctly in the afterword written by Michael Burawoy. “First, another world is possible; second, it could improve conditions of human flourishing for most people; third, elements of this world are already being created; and finally, there are ways to move from here to there.” (p. 154)

I won’t try to summarize the many good points in this remarkably cogent and erudite book. You should read it for yourself. Ask your library to order it. But Wright directs us throughout the work to consider three essential cluster of values in both critiquing capitalism and in forming alternatives –

I have a growing realization that it’s at this basic level that our deeper conversations must go to move ahead as a single family on a finite planet. Wright helps us consider those fundamental values and their different meanings to different folks. Spending some time with him and his ideas through the pages of this book is a good tonic, regardless of where one sits on the political spectrum. His tone is a compassionate one, not an angry one. It makes it an easier read. That he dedicated his last days on earth to offer these ideas to us is quite a gift we should treasure and share. Hopefully a couple of readers of this blog will find their way to it and be glad they did.

Posted by Possibilitator at 8:19 PM No comments: Links to this post