The Rush to Avoid Taxes

We now have less than 30 days to finish up our federal tax forms and get them to the IRS and state capitols. As I noted recently in this blog, "taxes are dues for living in a civilized society". So why do we all seek every advantage to reduce those taxes? We want deductions for our home (interest on mortgage, property taxes, etc.), for our charitable contributions, for state and local taxes paid, the list goes on.

There is an entire industry focused on how not to pay taxes - accountants, tax lawyers, tax preparation firms, all promising big savings if you know where to look and how to manage your affairs to minimize the dues we supposedly pay for a civilized community. Can we deduct our travel expenses for volunteer work, how about the tax credit for our solar installation, or the new energy efficiency changes made to the home?

Of course these are relatively small deductions that save many in the middle class a few hundred, or maybe even a couple thousand dollars in taxes per year. How can we actually minimize our overall tax rate we have to pay? Simple - by managing our funds so that more of our income arrives through capital gains than real work. Not surprisingly capital gains are almost entirely in the hands of the wealthiest. The wealthiest 1% make more than a third of their income from capital gains. The  New York Times reported that "estimates show that nearly 70 percent of all capital gains benefits go to the top 1 percent."

While the plutocrats and their neighbors cash in at lower income tax rates than middle class citizens with larger deductions and the lower capital gains rate, it seems like nearly everyone is hooked on the notion that paying taxes is something you must avoid. And if you are wealthy enough, you can afford the services of the aforementioned tax consultants to help you do so.

Of course the corporate world, also run by the wealthiest among us, takes tax avoidance to a whole new level, whether it's from hiding income in offshore tax havens, or having their hired lobbyists create a specific tax loophole for them, in exchange of course for a nice little contribution to the legislators that are willing to fill their pockets. Oh yes, again let's not forget how they use their accumulations to take advantage of that low capital gains tax rate.

While I'll admit I don't own a PhD. in economics, looking at changes in the tax rates since World War II shows a striking parallel shift in income inequality. Every time we make yet another reduction in the taxes for the wealthiest, we increase the inequality. The trickle down "voodoo economics" plan boosted by Ronald Reagan never really trickled down. Surprise!!!

Mr. Trump's recent budget proposal accomplishes this not simply by cutting rates directly, which he is certainly aiming to do, but as a recent analysis, reported by the New York Times last week  of the TrumpCare proposal indicates, that $1 Trillion in tax cuts embedded in it will over a decade will find their way into the pockets of the richest Americans.

The House Republican Tax plan as reviewed by the Center for Budget and Policy Priorities shows visually how the tax code may be further loaded to the wealthiest.

So the reduction in progressive taxation that gained steam with Ronald Reagan's "Voodoo Economics" continues.  Or does it actually get worse? If one looks at the holes collectively engineered into the social safety net by the Trump budget proposal,  we can see more and more people falling through it. But in Speaker Ryan's world, "it's their choice".

If we are to live in a civilized society, that doesn't let our brothers and sisters fall through our porous safety net, we need to all consider paying taxes as our dues. Making that system fairer, i.e., more progressive, is essential to that end. The security of each of us is entangled with the security of all of us.


One planet, one human family, one common future.
Posted by Possibilitator at 9:07 AM No comments: Links to this post

Cashing in on Fear

While it seems obvious to me, evidently it isn't to many Americans. Donald Trump and other fear mongers among us are constantly trying to make us afraid of - immigrants, minorities, Muslims, LGBT, terrorists, criminals, axis of evil....ad nauseum. If they can sell the fear, we're more likely to succumb to their proposed remedy - build walls, more guns, better locks, bigger armies and navies, yada, yada, yada.

I've been thinking along this line for a long time, but an article recently passed my eyes that put some solid data behind it in "Why Are People So Averse to Facts"  by Prof. Tristan Bridges from the website Sociological Images. The article posted last week discusses the claims of a certain President that crime is on the rise along with the data that shows the opposite. While of course the make believe world of this detached fellow is of interest, what I found more interesting in the piece was data from annual Gallup polls between 1989-2016 that showed the majority of the American public has consistently believed crime was getting worse when it wasn't.

Interesting enough it was just a week ago that the very same author of the crime myth was selling another bag of fear around terrorism. This one comes with an additional $54 billion price tag, on top of the $600 billion we already spend on 'defense'. The lunacy would be laughable if it wasn't so harmful. If our major security concern is global terrorism why would one argue for building up a larger navy, adding 75 more ships to the 275 we already have floating around the world? Are nuclear powered submarines the answer to terrorism? This isn't defense, it's offense!! 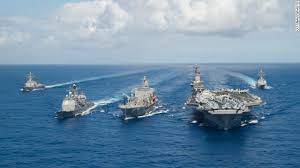 But, let's not let any facts get in the way of protecting us from hyped up fears. Lockheed Martin, Boeing and their collaborators are happy to sell weapons to the US government or any other nation that buys the belief foisted by the Military-Industrial-Complex (MIC) that the latest weaponry and a larger military footprint will bring them peace and prosperity.

The US government even works as arms merchants for these purveyors of weaponry, greasing the palms of the buyer - whether the purchase be planes, landmines (we still haven't signed the convention to outlaw them- one of only 35 countries out of 200), tanks, missiles, whatever. Note simply recent huge arms sales agreements with Israel and Saudi Arabia, and even more recently Vietnam.


Juxtapose these increases with the announced cuts to diplomacy and foreign assistance announced announced subsequent to the military build-up. Do the proponents seriously believe that we will defeat terrorism with more bullets and less bread? Do they think for a minute that we will win the hearts and minds of those who see us as global bullies as our military might becomes even more expansive?

The National Priorities Project notes that the $54 billion that will be cut to pay for the expanded  militarism of this regime exceeds the entire budgets of the following:

Meanwhile no mention of cutting the enormous waste in military spending, as noted by the Pentagon's own study last fall that identified $125 billion in waste. Since the Pentagon is never audited, that figure is probably low.  Regardless the American public takes it all in without barely a whimper of protest, evidently convinced that the fear mongering of the MIC and their current White House champion is true.

If we don't challenge the madness of militarism, we will insure the bullets and landmines we deploy under the guise of 'defense' will continue to harm innocent civilians. Meanwhile robbing both American families and our less fortunate of investments in true human prosperity.
Posted by Possibilitator at 8:02 PM No comments: Links to this post

There's A Change A-Comin', or Is There

One of the surprise results of the November election has been the stimulation of previously docile citizens to engage with the political and policy gears of our nation. I have attended many organizational meeting of groups I’ve been active with for some time, where attendance has doubled or more, seemingly overnight. The newcomers say something like, “I’ve been sitting quietly for too long and I now need to become active.”

With this onslaught of participation organizations, as well as the newly engaged citizens, seek to focus their energies to make a difference. Even for seeming veterans of grassroots, civil society efforts that call for making a difference has been re-energized. But a fundamental question is “How Change Happens”.  This happens to be the title of a new book by Duncan Green, published late last year by Oxford University Press and Oxfam. Green has been active in global development work for decades, most recently with Oxfam. He is a student and practitioner trying to understand what really works! This is written for both citizens and scholars of development in a very readable but well referenced work. What he has learned and shared in this insightful book is what he calls a “power and systems approach” (PSA). This is an approach that doesn’t put all of its eggs in a single basket or look for the one sure-fire linear approach to success. It assumes a deeper level of complexity in the systems one is trying to change and therefore the need for curiosity, humility, and reflexivity.

My own experience, not nearly as deeply rooted as Green’s, has been increasingly recognizing that reality. At its base is a recognition that we cannot control all the elements of a system, nor predict them all with any certainty. Green gives example after example of how the unexpected arrives and either thwarts or expedites the desired change of the best laid plans.

Green encourages curiosity, study, reflection, and willingness for trial and error at small enough scales that one doesn’t become trapped with a singular approach. He encourages the effort to understand the system. Where does the power lie? How does one learn to ‘dance with the system’, a recognition of the work of the late systems theorist Donella Meadows. He also looks at the importance of addressing social norms, the role and nature of good leadership, the opportunities and constraints of working through political parties and electoral politics, the concept of positive deviance,and the power of advocacy. Some very brief hints of his thoughts are excerpted below.

How Change Happens won’t give veteran or rookie citizen activist a silver bullet approach to follow. But the analysis he shares should help situate one’s expectations for success in a more realistic mode. This is the kind of necessary reflection and analysis that is important for long-term change to occur. It provides an equal dose of long-term nourishment for activists to remain in the struggle for a better world for the long haul.

Those interested in following Green’s thinking along this and other issues of human social development can read his blog, From Poverty to Power at Oxfam’s blog site. Or visit the website created around this book with access to parts of the book and links to other resources.