What is Enough and Who Decides?

Enough - sufficient to satisfy a need

Sufficient - Being as much as is needed

These definitions from the American Heritage College Dictionary( 4th edition, 2002) are worthy of  more than passing consideration as we face multiple challenges of trying to live well, justly, equitably on a single finite planet and to leave those that follow us the same possibility. To fall short of 'enough' is to live in poverty or wretched conditions in a most fragile state. Too many of our brothers and sisters share that plight. There are more than 65 million displaced persons - families forced from their even most modest homes. More than a billion mired in extreme poverty.

There is modest attention in the developed world directed toward enabling those who struggle at the bottom of the pyramid in their own nations to receive a 'minimum wage' for their labor. But by almost any measure that minimum alone will not lift anyone out of poverty. Thus the call for a 'living wage' that coupled with a sufficiently strong social safety net would provide for 'enough' to live on.

I just finished reading through a new short, but thoughtful book that examines the concept and possibilities and constraints around the idea of a "living wage." The Living Wage, by Donald Hirsch and Laura Valadez-Martinez is part of a new series of short primers that "introduce students to the core concepts, theories and models, heterodox and mainstream, contested and accepted, used by economists and political economists to understand and explain the workings of the economy." 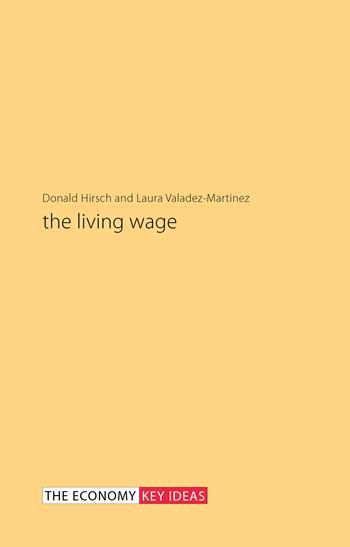 The authors do an admirable job of getting into the weeds to help us see better what such a concept means, how attempts to apply it have fared, and what  we might also use to assist in meeting the goal of insuring that workers make an adequate income from which to live a modest life. They spend time examining the difference between a mandatory minimum wage and the various ways a living wage has been defined. While I won't attempt to summarize the breadth of their explorations in this short blog, I would like to use it as a jumping off point of something they largely ignored, but which I think is essentially required if one is to realistically provide an economy where all workers make enough income to live a life with "minimum acceptable living standards".

The elephant, that I see standing in the room, in all of this discussion about a realistic living wage is the moral obligation to consider a "maximum wage" or perhaps in the view of Socioeconomic Democracy author Robley George, "maximum allowable wealth." Wealth is obviously the cumulative measure of income, not simply a weekly check or an annual salary. With all the talk and increasing data about growing income inequality you might think that there might be equal discussions not simply about the limits we believe those at the bottom need to have acceptable living standards, but also of the limits at the top. In other words, in this finite world, how much is too much?

As were were struggling to emerge from the Great Depression, which like our most recent downturn a decade ago was driven by the greed in the financial world, there was a debate about what was "too much". President Roosevelt, during the early years of WWII pushed strenuously for a maximum after tax income [the only one that ultimately matters] of $25,000 (the equivalent of some $350,000 today). Although he kept pushing this idea a conservative Congress pushed back. But by the end of WWII there was in place a 94% tax on all income above $200,000. As author Sam Pizzagati notes,

The graph above from Wikipedia shows that the top rate stayed above 90% into the 1960's when it dropped to 70%, and with adoption of the Reagan trickle-down theory in the 1980s a more precipitous drop to below 40%. That last drop also included a collapse of the number of brackets which is similar to what we saw preceding WWI, when we were in our earlier period of gross inequality.

Roosevelt's strategy was to simultaneously support the war effort and build a strong safety net for the citizens who had suffered through the Depression. It's pretty easy to see that the growth in income and wealth inequality we have experienced since the end of the Eisenhower administration is directly correlated with the drop in the maximum tax rate since then further diminished by Reagan and Bush II tax cuts. So we shouldn't be surprised when we see the results of the recent Trump/Republican tax cuts to keep that inequality increasing.

Increasing the marginal tax rates is one approach to shrinking income inequality. Another approach which has been murmured in a few places is the idea of mandating maximum wage ratios. This is the idea that the ratio between the highest paid employee and the lowest should not exceed a certain ratio, e.g., 20:1. The founders of Ben and Jerry's ice cream initially had a self-imposed 5:1 ratio that they held for 16 years before it shifted to 17:1. Once they were swallowed up by Unilever that practice evaporated.

CEO to worker wage ratio has ballooned in the past few decades peaking during the Clinton bubble years.

The most recent study from the Economic Policy Institute on this issue from 2016 showed the average ratio of the 350 largest public corporations to their median wage employee (not the lowest paid - the one in the middle) was 271:1.

A report last week from Equilar of 356 corporations for 2017 puts the average CEO to median wage worker at 241:1. We can expect more reports as the 2010 Dodd-Frank legislation require this figure to be reported by public corporations starting this year.

The AFL-CIO looks at the average pay ratio between the CEOs of the Fortune 500 and their production and non-supervisory workers and found the ratio for 2016 was 347:1. The various studies note  that corporate CEO's also usually get many more benefits that are not tabulated into these compensation studies.

If we were to decide how much was enough at both the bottom and the top, how might we do that? Who gets to decide? Robley George has offered and very intriguing possibility worth some serious consideration. To really appreciate it one should read his book length review of these issues in Socioeconomic Democracy. A short, but well done summary of his arguments and suggestions is available here. George suggests that all voting citizens of the nation discuss and vote simultaneously on the "Guaranteed universal minimum income" and the "maximum allowable wealth" [note this is wealth not income. He discusses the rationale for this distinction and approach].

If a citizen feels that there should be no maximum they could vote for the cap to be at infinity. If they decided that there should be no floor, than can vote for zero. Using a system of preference voting the votes are tabulated and collapsed until a figure is reached at each end for which 50% +1 is achieved and the benchmarks are set until revisited at the next general election where they can again be changed by the popular vote.

Of course this seems radical to our well-seasoned eyes. But a year long public discussion might lead to some businesses, local governments or communities, or even states giving birth to approaches that accomplish some of the same goals in a democratic fashion. While this approach might help us move closer to a more equal society within one nation, this still leaves us the serious and moral dilemma of how to address global inequality that is so much more severe. While the difficulty could easily steer us away from addressing what to many appears intractable, we need to address this with the same commitment to fairness and justice for which we seek it within our own country.

There is only so much of this planet to share and yet preserve for those generations to follow. Grappling with these issues will require all of us to dig in, to study, to listen and to seek solutions that perhaps we cannot yet glimpse from where we stand. When we do this in a spirit of solidarity with all we share this planet with, the outcome must improve our current state. Those of us who have been fortunate enough to reach senior citizen status especially owe our remaining days and years to seek solutions for those we love and the residents of planet earth we leave behind.

Let's get on with it. Up off the couch.

In 1935, Marine Major-General Smedley Butler wrote  "War is a Racket" . In it he offered the following relevant advice pertinent to this blog entry:

"The only way to smash thus racket is to conscript capital and industry and labor before the nation's manhood can be conscripted. One month before the government can conscript the young men of the nation -- it must conscript capital and industry and labor. Let the officers and the directors and the high-powered executives of our armament factories and our munitions makers and our shipbuilders and our airplane builders and the manufacturers of all the other things that provide profit in wartime as well as the bankers and the speculators, be conscripted -- to get $30 a month, the same wage as the lads in the trenches get. [That soldier's wage would be $526.56 in 2016 dollars. The monthly wage for a modern E-1 (enlisted soldier) is $1,599.90.]
[as cited in Gar Smith, The War and Environment Reader (2017) p.266.
Posted by Possibilitator at 3:30 PM No comments: Links to this post